I’ve been beating the drum about live streaming for a while. I think it may be a way forward for the musicians whose careers were decimated by the loss of CD revenue. Uptake has been slower than I expected in this community. It does represent a shift in the way we do things. And the loss of the immediate crowd can be hard for performers who draw most of their energy and inspiration from the audience. On the other hand, it opens the door to an audience of far greater geographic and demographic diversity.

The four greatest challenges for the touring musician are transportation, food, lodging, and time.

Transportation just gets more and more expensive. Most local travelling is done by car and you are not just paying for gas, but also for insurance, wear and tear, routine and extraordinary maintenance on the vehicle, but you are also taking a risk every time you leave the vehicle unattended that someone may break in and steal your stuff. If you are travelling further afield, you have airfare, trainfare, carfare and other associated expenses. Maybe travel insurance. And the sad truth is that just the act of travelling itself opens you up to a wide variety of other dangers that I won’t enumerate here. 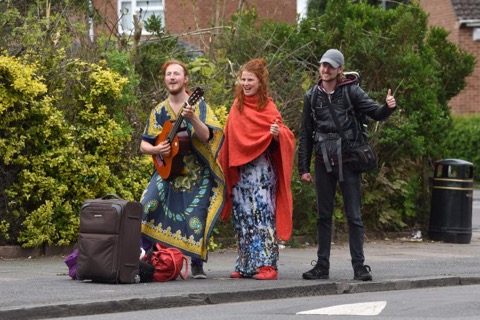 Food can be another issue. It’s hard to find healthy, reasonably priced food on the road. Smartphone apps like Yelp and TripAdvisor can help, but many communities don’t have a lot of viable options.

Lodging can be among the most expensive factors. I travel constantly and am blessed with a wide network of friends who let me “couch surf”, but still wind up spending a significant amount of money to sleep on my journeys. And I have no pet sensitivities, no food allergies, or issues with light and noise. I bring a sleeping pad with me at all time and have slept in hallways, basements, garages, and tree forts. Any of these can be a deal breaker for some people.

But, of course, your most valuable resource of all is time. On a good day, you might only spend an hour driving to and from the gig. But in my professional career, travel times of 3 to 5 hours between gigs were no uncommon, Plus the time spend loading and unloading the gear, packing and unpacking your luggage, waiting for ground transportation, waiting for food, waiting for sleep, budgeting in extra time for the “Murphy Factor.” It all adds up rapidly. As you can see the “opportunity cost” for live streaming is practically nil, where conventional gigs can cost you $100 or more before you strike the first chord. if you are live streaming from your home, You might have setup and tear down times of 5 minutes or less. Literally 95% or more of your time might be spent engaging your audience. In addition, your streams may be archivable, and become a resource that pays you over and over and over again.If you are live streaming from gigs you may be able to, for little or no additional expense, amortize that performance to a much wider and more persistent audience.

I have done several handouts previously on Live Streaming. I’ll try not to rehash too much of that material here, To that end, here are the links.

Getting the most out of live.me and live streaming alternatives

Live Streaming – What are you waiting for?

Seven Ways to Monetize the Internet (for Musicians)

And I have started a Facebook group for Live Music Streamers to share tips, tricks, and techniques. I am hoping to foster collaborations and audience sharing. I would love to get more hardware/software reviews there. I feel like I am the only one doing them.

But lets forge on to what’s new. Concert Window has folded. Arguably the most popular streaming platform among folkies, it languished technically  and never really solved many of it’s nagging technical problems. I was hoping they would get a bailout from somebody who could help them with this, but ultimately, they were sort of a mom and pop operation that never stood much of a chance.

Meanwhile the Big Boys have all doubled down and reemphasized streaming on Facebook, Instagram, and YouTube. Instagram launched the portrait-only InstagramTV and you can even start a live stream directly from the twitter app powered by Periscope. I just saw an ASCAP video today from a host called PSCP.tv which apparently is an arm of Periscope.

The problem is that the behemoth services consider viewers THEIR customers not YOUR customers. And you are THEIR product, the sticky goo that attracts and holds viewers in the sphere of their advertisers.  While their virality and reach is largely unmatched, the options for monetizing that content are meager at best. Facebook doesn’t understand or care about the revenue you lost when CDs stopped selling. But I think it is important to leverage the big services to funnel audiences to your streams if you choose an alternative platform as your streaming home. It is even more important to always link viewers to your web domain. You need them in your database, since facebook wants to charge you not to block content from your followers.

There are innumerable platforms for live streaming from your mobile devices, many of which have built in tipping options. Typically the streamers cut of these revenues is undercut by the large percentage the hosting platform takes. They lock you into using their proprietary apps, but the revenue option may make it worthwhile. The behemoth services also support live streaming from their mobile apps, albeit without direct payouts to streamers. It seems there are new services almost weekly. While live.me remains a popular platform, others come and go. Recent additions are DLive, TikTok, Ilive, Bigo live, Vuuzle, Livestar, live Now, YouNow, Uplive, Stream.ly, Tango, MeetMe,Trillo, Yubo, LiveAF, Coco, KittyLive, V Live, StreamKar, Omlet Arcade, FaceCast, DrFame, Line Live, ExclusLive,live up, Doki doki live,  and… You get the idea. No clear winner has emerged, and, by the time it does, it may be widely populated with musicians. I think it behooves you to try half a dozen of these out. If you do, please report to the live streamers group what you find so we aren’t duplicating each other’s efforts.

The battle for eyeballs is so intense that some services are hiring contract streamers to beef up their content. LIve.Me used to do that, i’m Not sure if they still do. Facebook is doing it right now with Video Game streamers. And I think a lot of the Mobile platforms are dabbling in that. Maybe we could persuade facebook to try that with musicians, if we only knew who to approach.

With all this streaming going on? How do you find anyone? The best way is to follow them on their streaming platform of choice, but other tools are cropping up. LiveList says they will be a clearinghouse to locate online concert streams. PeriscoSearch, Perisfind, live-events for youtube, and liveTube are all mobile apps that claim to do that.

But lets  talk hardware for a little bit. I posted a link in an earlier tutorial about building a modest lighting system for under $100 with parts from the hardware store. It works, but if you are willing to invest a little more, you can reap big dividends. I recently bought a Neewer Lighting system from Amazon for $230. You get 3 lighting panels with 660 LEDs per panel, with stands, barn doors, and soft cases. The kit provides considerably more light than the home brew version and more light means better video quality. CRI is 96 (out of 100- that’s very good) color temperature is variable from 3200K (tungsten) to 5600K (daylight). It’s a very cost effective setup. It is also compatible with Sony style camera batteries. You can buy a kit with 6 batteries and 3 chargers for an extra $140 or so. That will give you a couple hours of light outdoors or in areas with no AC power. 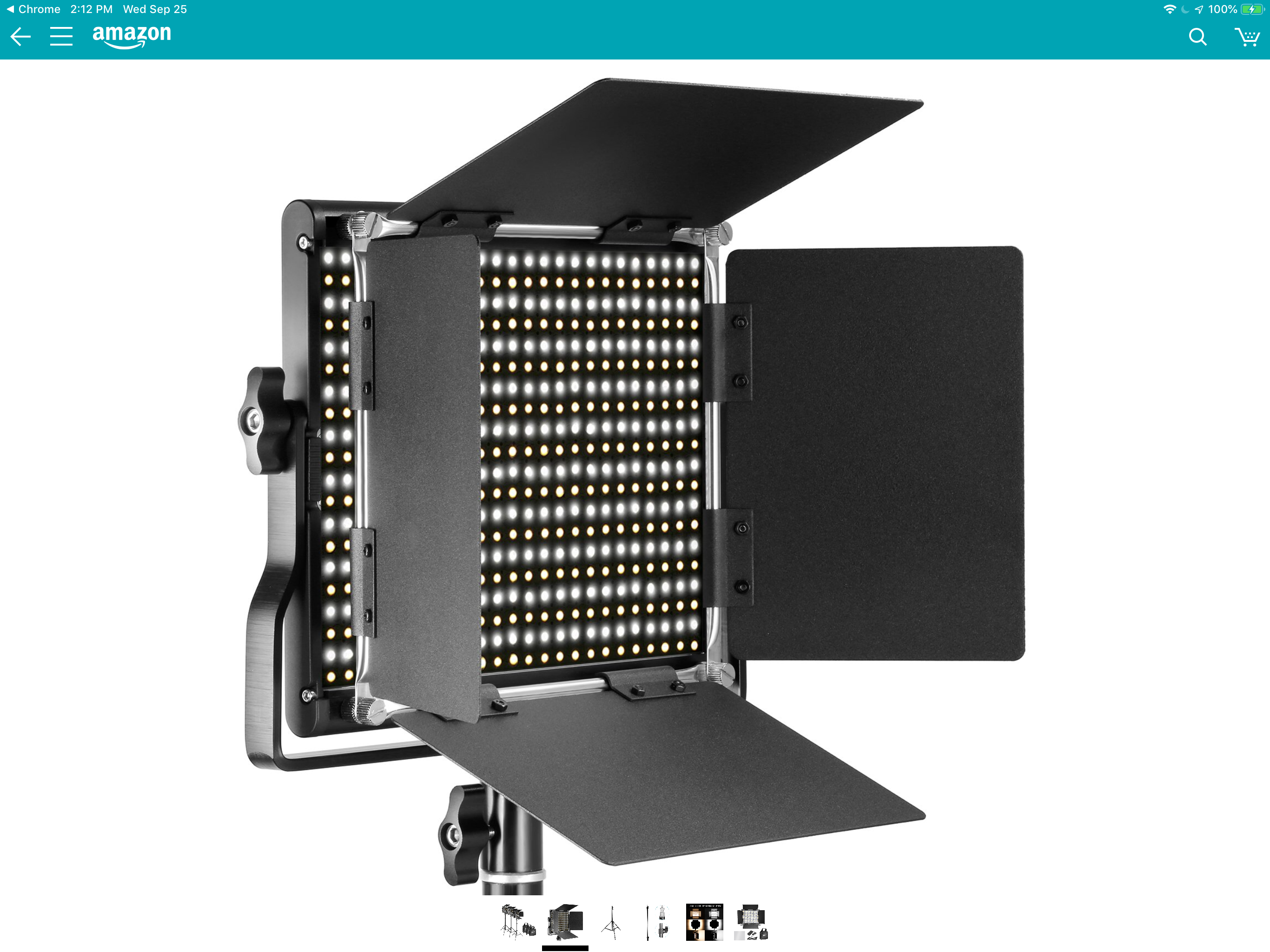 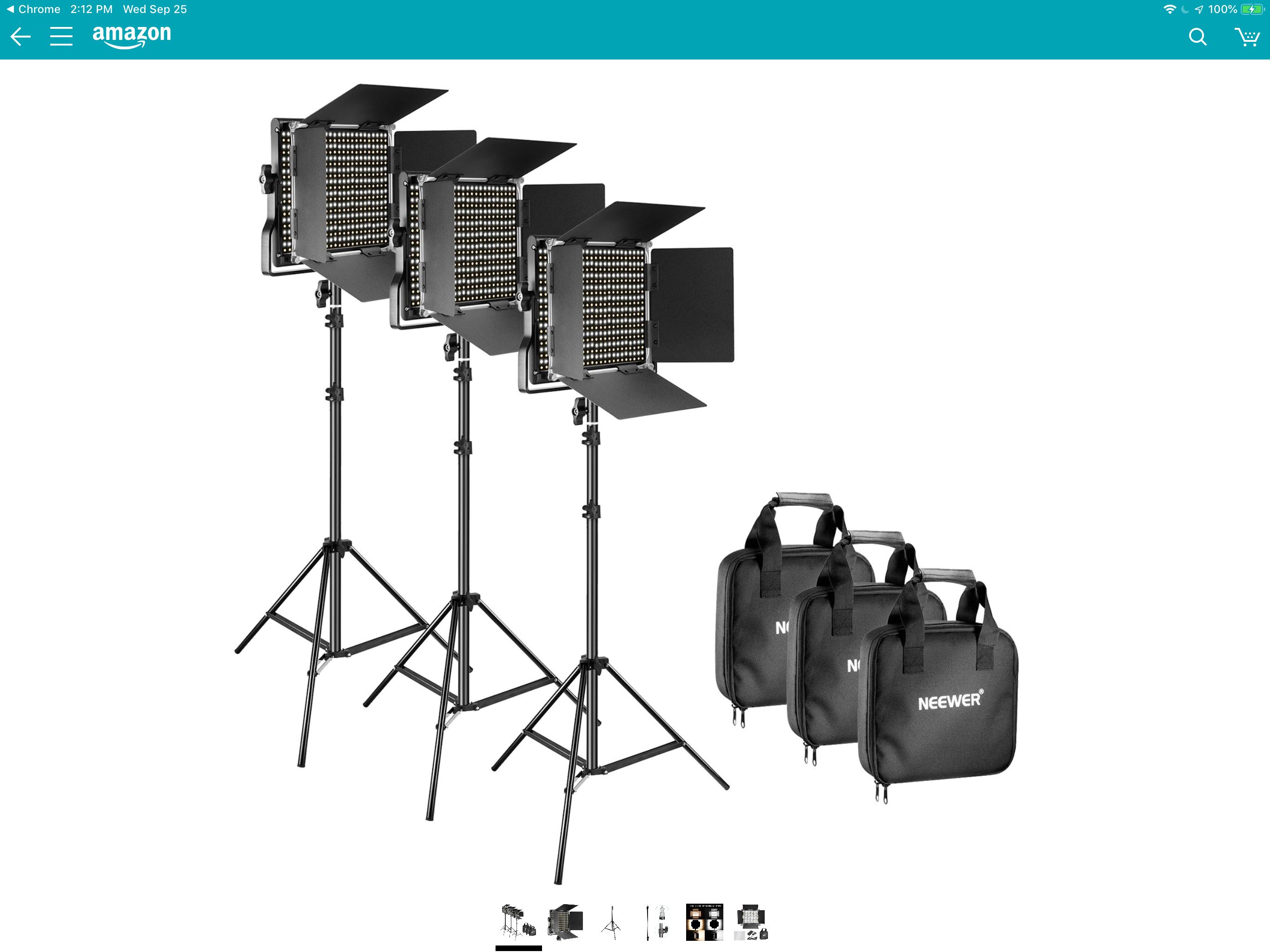 I’m still toying with different video hardware. Mostly I use either my IPhone XR or my MEVO live event cam. I generally prefer the MEVO, primarily because I can control it surreptitiously from my ipad. The camera itself is tiny and can be mounted from the ceiling or a lighting stand or almost anywhere. It will shoot at resolutions up to 4k. I prefer 720p for my live streams to keep the bandwidth reasonable. In extremely limited bandwidth situations you can stream at 480p or even 360p. Amazon sells the original MEVO for $199 and the MEVO plus (same resolution, stronger wifi) for $399. I see the originals on YouTube for around $100. The MEVO shines brightest when it is controlled by an operator, but it has several automatic features like face follow and automatic switching. 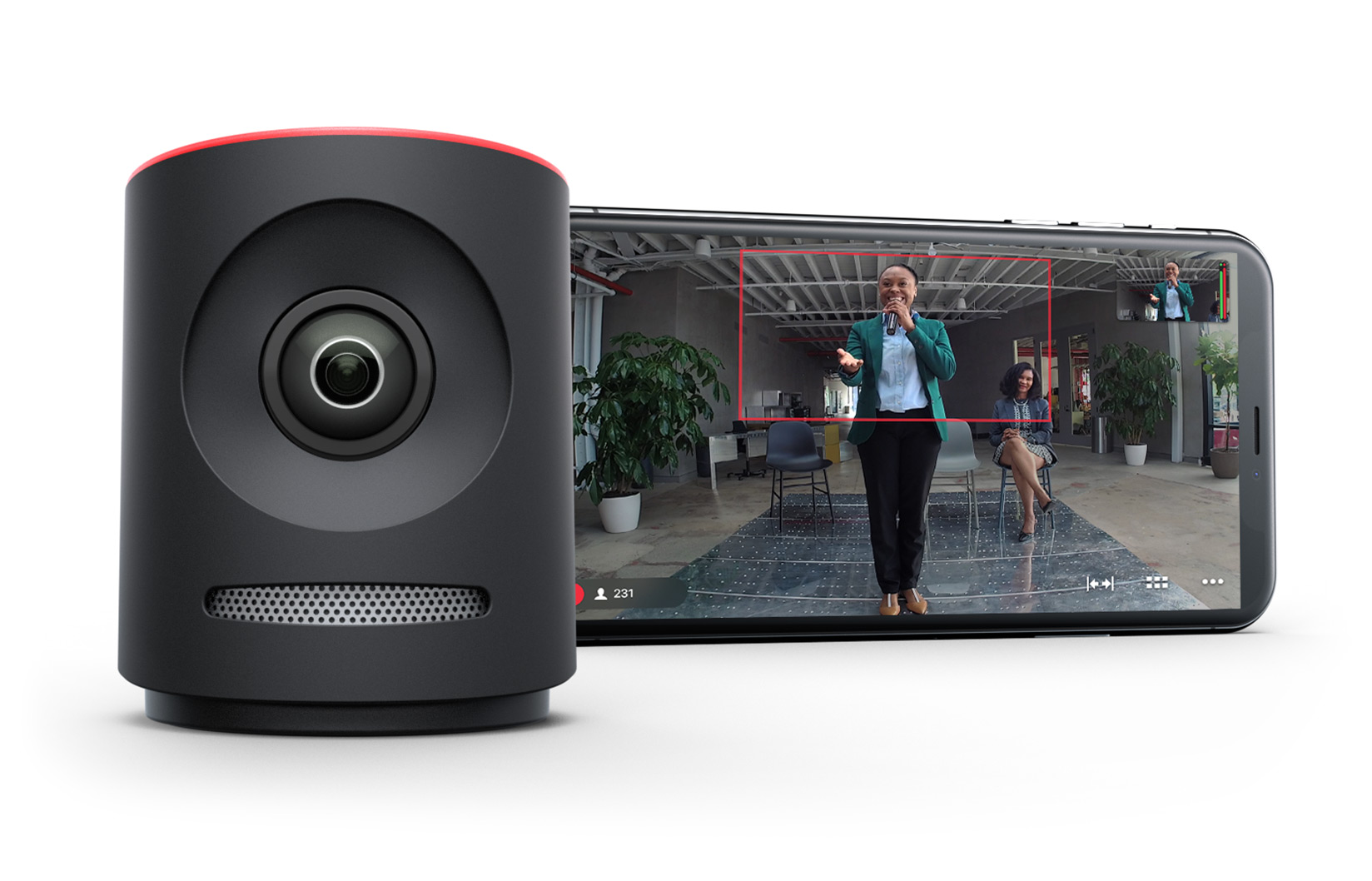 The Achilles Heel of the MEVO  is its poor internal microphone. It’s not horrible, but inadequate for music. You can add the MEVO Boost battery pack and Ethernet interface for another $199. It also has a CORE audio compatible USB interface that works with any signal that’s compatible with a Mac or IOS device, allowing you to use virtually any professional microphone or board feed with the MEVO. 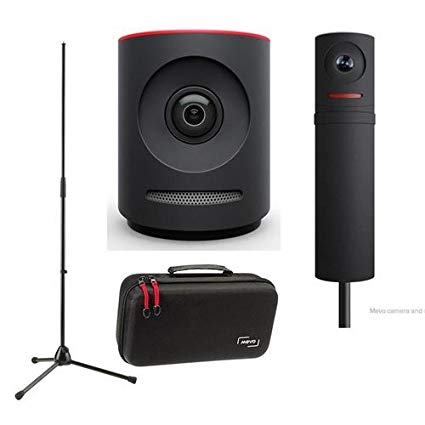 Another bane is that the best camera location is usually NOT the best microphone location. And it’s messy and annoying spreading a bunch of cords all over the place. To that end, MEVO recently released a free app called MEVO mic which allows you to take any IOS compatible microphone or audio source and transmit it wirelessly to the MEVO. You can mix up to 3 of them into your recording. 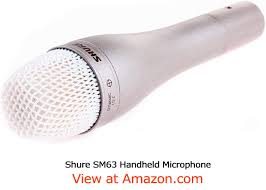 And can you simultaneously stream and record a performance auto the internal microSD card? Yes you can. I’m told you could even stream to multiple platforms at once, I haven’t tried this. I think it is forbidden by most of the platforms who want to hold you captive on their site. Eventually, if you want to go really crazy you can upgrade to Livestream Studio 6 for true multicamera shoots.

Lastly, on the mobile side, I just bought a PIVO, I’m not even sure exactly what it does, but I think it’s supposed to make me breakfast tomorrow morning.

For most budget streamers, I feel that your smartphone camera is of better quality than any other camera under $1000 that you are liable to find. If you are a total quality fanatic and have the money for a high quality DSL camera, There are other alternatives. Blackmagic Stuidos makes kind of a nice box called the Web Presenter that takes any SDI or HDMI video signal and massages it into a form that looks to your Mac like a standard Webcam, making it compatible with a wide variety of platforms and services. 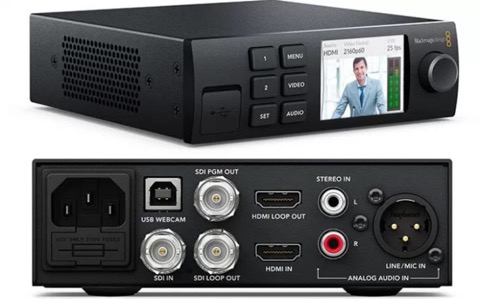 My pal Bob Bennett uses a Mac software called Ecamm Live that adds a plethora of features to your live stream with live camera switching, screen overlays, scheduling and more. Prices range from $12-$20 a month.

How does it look?

I won’t even begin to talk about DSLR HDMI cameras. I don’t have the money to dabble in those. You need to do that research yourself. Personally, I think you can get great looking and sounding live streams with under $500 worth of gear.

Here are a few more important statistics on Live Streaming. And more.

I believe the future belongs to the people who can reach new audiences. I can’t think of a better way than live streaming. Please join the Live Streamers group and team up with us.