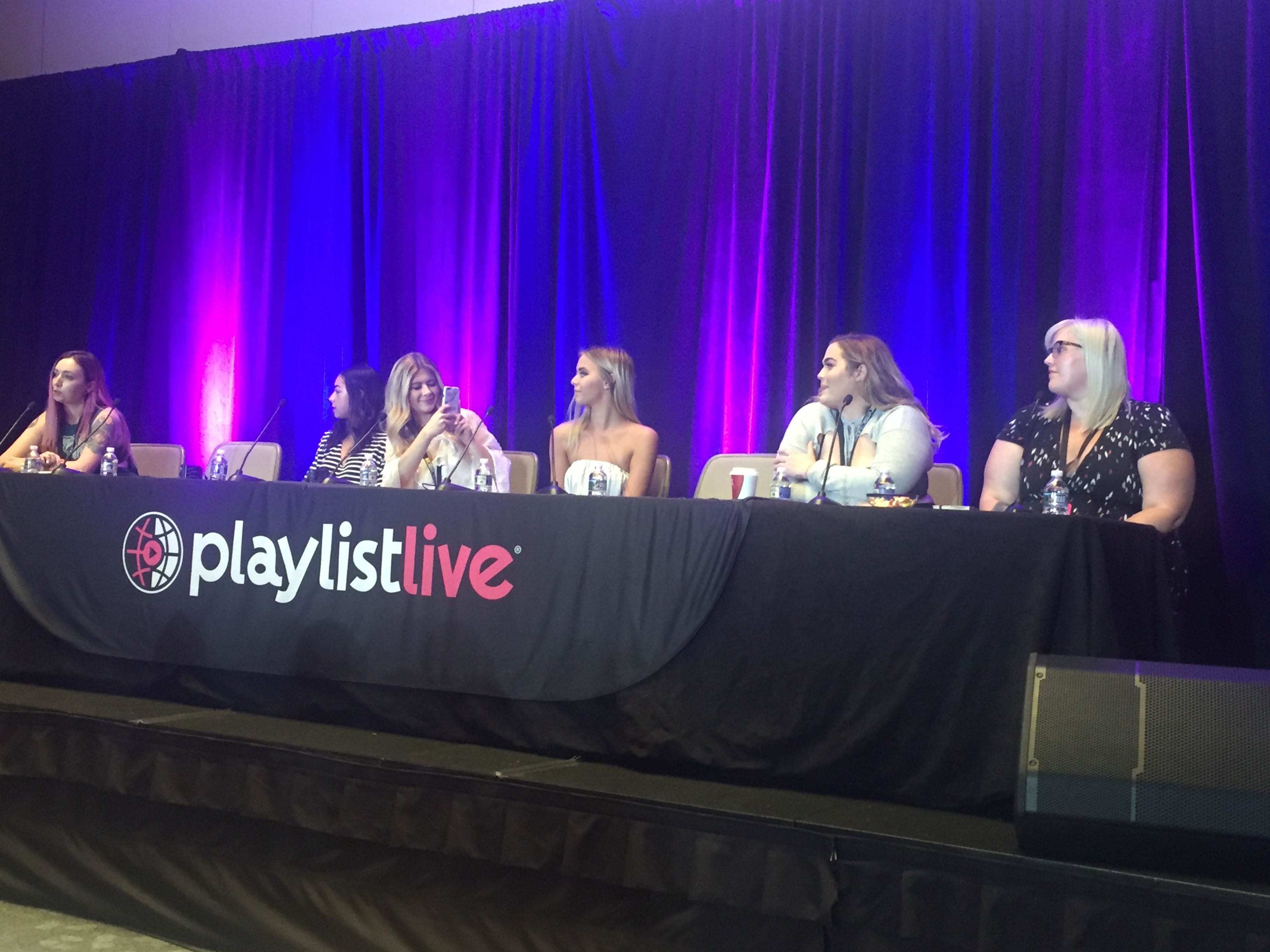 The Playlist Live conference is relatively new. Started in 2011, they held 2 3day events this year. The first in April with a reported 12,000 attendees. I attended the Washington DC conference last weekend for the first time. It was an eye-opener.

First off, I felt incredibly old. The Woodstock generation was almost entirely unrepresented at the event. The 500-600 attending “Content Creators” mostly ranged in age from 10-30 years old. A majority of the agents, managers, and other industry representatives who joined the panels similarly appeared to be in their 20’s and 30’s. “Old School” creators mostly dated back to the earliest days of YouTube, which debuted a mere 12 years ago. There is no intrinsic reason to believe that content creation is the province of the young. On the contrary, I felt that a lot of Creators must be hampered by their lack of life experience and experience crafting art, words, or music. The audience demographic also typically is predominantly young, making it tougher for older creators to gain traction as quickly, but it can be done.

What these kids lack in technique or life experience is largely offset by their youth, enthusiasm, and a burning desire to “be somebody” on the internet. I had come to the conference for a variety of reasons, but maybe the biggest driver was to see how original musicians were leveraging the various apps and platforms to bolster their careers. In that respect, I was largely disappointed. I met only a handful of musicians who were performing their own material. The audience seemed more than receptive to hearing new songs. But, even the musicians I met who are doing that kind of content seemed to have a lack of training and focus. Much of the material felt contrived and amateurish. Noted exceptions were Noah Schnacky,   Kayla Nettles and Dodie Clark, all of whom I found credible and engaging. I couldn’t connect emotionally with Spandy Andy and some of the other featured artists. Artists featured on the live stage all seemed to have fantastic hair, but many of the musical performers sang their hits to music tracks which already contained their own lead vocals. The result was largely cacophonous. I guess this is the new normal, but I found it unsatisfying.

Many of the “creators” I met seemed surprised when I asked them “what” they did, if they sang or danced or tutored math or whatever. A surprising number of creators had no discernible talent and their content generally centers around rants, pranks, parodies, sight gags or other forms of general nonsense. There are also an abundance of 15 year olds giving life advice, makeup tips, or general emotional support in teaching people to “Love themselves”, (which seemed to come quite naturally to most of them…) The LGBTQ community is well represented in the ranks. And they aren’t all kids. For instance, there’s Granny Pottymouth.

YouTube, Instagram, Twitter, and SnapChat seemed to be the main focus of conference attendees, who displayed an almost universal distain for Facebook. I was surprised that live streaming has not yet been widely embraced by more creators. I guess, no matter how young you are, you can still get set in your ways. Personally, I think live streaming is the most exciting thing to come down the pike in years. Platforms like Live.me, musical.ly, Bonklive, Concert Window, Periscope, and Busker are all gaining traction within the community.

The first day of Playlist Live was a business day, a series of workshops, looking at various business aspects of social media stardom. We met with content creators, agents, managers, Multi Chennel Networks, publicists, and other support professionals. It was very interesting. Coming from folk music world, I was stunned by the enormous amounts of money people were talking about, and the panoply of ways to monetize a career in Social Media. Not just gifting and tipping as in apps like Concert Window, Live.me, Busker, Musical.ly or Bonklive. But brand deals for product placement or creating association videos, merchandizing, commercials, acting in TV and movies, book deals, and personal appearances. There were several representatives there from companies seeking branding partners. I spent 20 minutes talking to a girl from Red Bull. This is a significant plank in their marketing platform.

There were techies too. I was very interested in an iPad based video switcher product from Cinamaker. Most broadcasters seem to be shooting content on their iPhones. Video producers all seemed to lean towards Apple’s Final Cut editing software.

For content creators and aspiring content creators the message was clear, unified, simple, and direct. Anybody can do this, you don’t need any special skill, talent, or training. If you have the desire, the work ethic, and the emotional honesty to be truly open and authentic with your audience. If you have the patience to learn the business (and the business is complicated and ever changing.) you can make a go of this. Everyone seemed very certain of this. And, judging from the creators that I met, they appear to be correct.

Given my background as a professional musician and computer geek, I found the underlying message disturbing. I come from a world where we hone our craft, practice our instruments, write and learn songs, learn stagecraft, etc. Study, practice, and aspiration all are qualities that I admire and respect. And I think they add value, a lot of value. I don’t doubt that creators can become popular solely on the basis of authenticity and desire. I’ve met them. But I can’t help but believe that people who can create artistic content with standalone value like music have an edge. The showcase artists chosen for the conference underscore this. Singers, dancers, artists, all add value to the equation.

So, if you are a musician reading this, I believe you have a head start. In this new digital world, where millions of dollars are changing hands every year, you can reach out and grab your piece of it. You have to put your fear and disbelief behind you. Abandon your preconceptions. Dig deep and follow your heart. Be honest and authentic. Trust that your audience wants to take this ride with you. Experiment with the tools and opportunities available until you find the best combination for you. The sky is the limit. But you have to DO it, you can’t just sit on the sidelines.